Your adventure, Stephen, began the day a Search dragon came to Jessaf Hold: one of the wealthiest Holds in southern Pern, and your home for 16 Turns.

There wasn't a boy or girl in all Jessaf who didn't hope the green dragon would Search them. Most of the eligible youngsters were scrubbed and stuffed into their best tunics to be presented to the Search dragon. But not you - you'd just come in from digging tubers, still covered in dirt. And you were the one that the dark green dragon's burly rider N'jol, Kistrith's rider looked hard at, and beckoned over, and asked how you felt about becoming a dragonrider.

It wasn't an easy decision, leaving your family behind. Since your mother died giving birth to your twin siblings Albon and Gettie five Turns ago, you've had to support your father around the cothold and in the fields. Your first blurted reaction to N'jol's suggestion was an instinctive, "I can't!"

But when your father heard you'd been singled out by a green rider of Madellon Weyr - and that you'd turned him down - he went pale. He sat down hard in the humble cothold that had been your home all your life. "You must go, Stephen. You must."

"You can and you will," your father said abruptly. "Your mother dreamed of dragons. Sometimes I'd catch a look in her eye, when a Wing went overhead... If she were still alive she'd want you to go." From around his neck, he took the blue feather pendant that had once been your mother's. "Here. Take this. It'll bring you luck. My son, a candidate for Impression!" 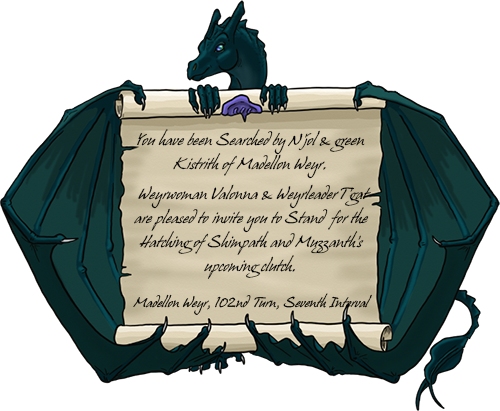 The very next morning, a dark blue fire-lizard arrived at the Hold bearing an official invitation for you to Stand. You left Jessaf two days after that, clinging to Kistrith's neck - and holding tight to your mother's lucky charm!

Your exclusive code is
HOLDER13

(all one word, case-sensitive!)