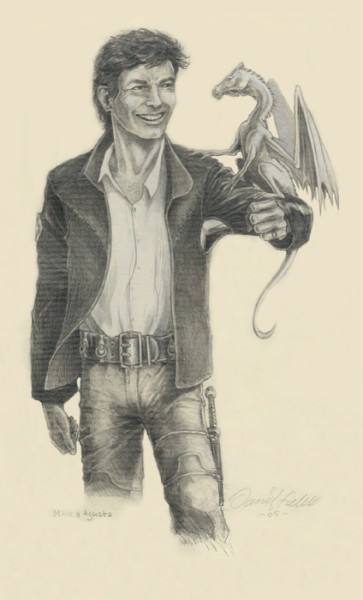 So if you’re all caught up with Dragonchoice 3, you’ll know that M’ric, my totally straightforward and not-in-any-way-morally-ambiguous brown rider, is coming in for quite a bit of attention at the moment.

M’ric, like many of Dragonchoice’s characters, is based on someone I know – albeit someone for whom relatively few decent reference photos exist, so the artists who’ve illustrated him in the past haven’t had an easy time. That being said, Daniel Falck’s portrait of M’ric and Agusta is pretty damn spot-on.

But then I went to see Star Wars: The Force Awakens (it seems redundant to add the subtitle; I mean what other Star Wars movie would I have gone to see recently?) last week, and spent most of the movie staring at Poe Dameron and wondering what the hell is M’ric doing in Star Wars (and why is he named after a Teletubby)?

Continue to Valonna the…wait, what?

One response to “A word on M’ric”